Terms were not disclosed. Imperial Plastics is a diverse thermoplastic molder with insert, gas-assisted and structural foam molding technologies. It has a 400,000-square-foot plant in Mora, Minn., and a leased headquarters plant in Lakeville.

Imperial Plastics was founded in 1968 and serves the agricultural, building materials, outdoor recreation and industrials end markets. It had a third plant in Mankato, Minn., which it opened in 2014 but closed in early 2017 after it lost contracts from one of its major customers who moved production outside the United States.

Commercial Plastics dates back to 1940 and is owned by brothers Bill and Matt O’Connor. It has plants in Mundelein; Waverly, Neb.; and Kenosha, Wis. According to the company’s website, it has 130 presses ranging from 55-2,000 tons of clamping force and about 320 employees.

CEO Matt O’Connor told a local newspaper in Mora, Minn., that both Imperial Plastics plants will remain open. He added that the acquisition will double its number of employees and square footage. Commercial Plastics did not respond to questions from Plastics News.

Commercial acquired its Kenosha plant in 2014 when it purchased the assets of Xten Industries LLC. It bought the Waverly plant in 2015 when it bought certain assets of Lenco Inc.- PMC.

“Imperial Plastics brings an array of unique capabilities and diversification to Commercial Plastics, which has established itself as a leader in the injection molding industry,” David Evatz, managing director and head of Stout’s plastics industry practice, said in a news release.

We’re taking a look behind the numbers for this week’s Plastics News ranking of the Top 100 North American injection molders. Actually, 103 companies made the cut with a six-way tie at the $70 million cut off.

This group represents combined related sales of $29.3 billion. While that number is above last year by a tiny fraction of 1 percent, the average sales per firm is down 0.8 percent. Why? Mostly due to declines in the automotive market in 2019.

Those companies were hit again with shutdowns due to the pandemic — which aren’t reflected in 2019 numbers — so it’s a tough market, no doubt.

What about other markets? Were they up? Well, in a way, yes, and in a way, no. Packaging and custom molders saw increases, but medical and industrial suppliers not so much. Acquisitions were still the best way to increase sales. Seven acquisitions are reported in the top 100 alone, with more to come in next week’s listing of smaller companies.

The biggest news was Berry Global Group’s purchase of RPC Group plc in June 2019. Combining their injection molding operations with previously ranked Letica Corp. has them shooting back up to No. 1, having moved down the ranking in 2012, when the automotive market was on the rise and Magna International Inc. took over the spot. Magna has since sold its interiors business to Grupo Antolin-Irausa SA.

Businesses are always looking for more ways to be more profitable. In our research, we saw some plant consolidations and rebranding. That means there’s now the renamed Jabil Healthcare. Some financial footwork was also afoot, with Novares Group SA emerging from receivership and Techniplas LLC filing for Chapter 11 protection.

Let’s get back to that pandemic thing, A very non-scientific look at our story listings has 236 mentions of COVID-19 in the eight weeks between the end of February and mid-June. I can’t tell if the disruptions helped or hurt our research.

On one hand, we heard from some companies that had not responded in the past. But at other firms, some communication departments were out of sync with our regular avenues to update information.

Very few of our telephone calls to company headquarters were successful, and our best responses came from email and cell phones.

This leads me into another of my public service announcements, this time to website editors: Please double check the contact email listed online, nothing is worse than generic mailboxes like [email protected] or [email protected] bouncing back as undeliverable. If you weren’t contacted for this ranking or any type of recent special coverage, please let us know how best to reach you.

And finally, congratulations to Tessy Plastics Corp. for breaking into the top 25 this year.

Want more information? Visit our top 100 ranking online at http://www.plasticsnews.com/rankings/injection-molders. And watch next week’s issue for the rest of this year’s injection molders’ ranking. 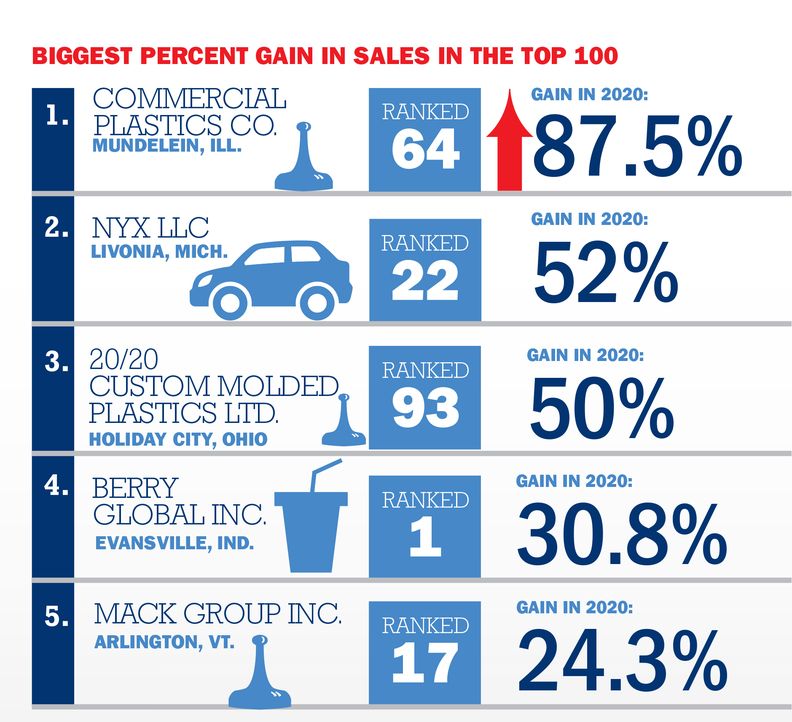 A plastic injection molding company with core competencies in design assistance, assembly, decoration and logistics. As a qualified supplier, it can also source non-plastics components, manufacture finished assemblies and products, perform quality assurance and ship the finished products to the end user. 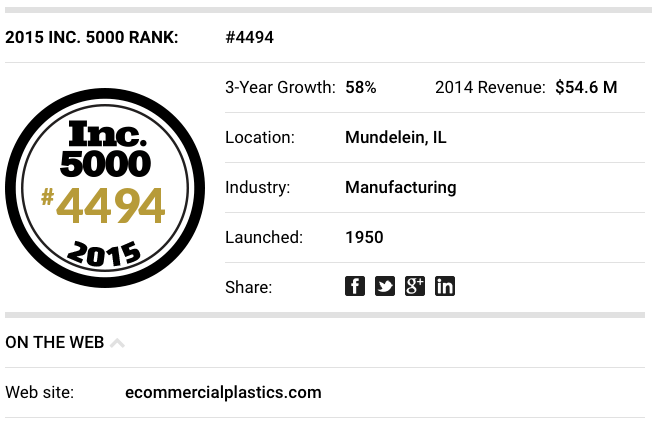 The goal of the new technology was to improve the performance of the customer’s product, improve sequential barcode processes, reduce set up scrap rates, expand label technology, improve MDR processes and improve production flexibility.  One challenge was the sequential barcodes on each label set that demanded stringent quality control.  We now read the barcodes upstream in the process, which eliminates out of sequence barcodes in the molding process.   All of these goals were achieve above our expectations and we now have other customers asking to use this technology.

Commercial Plastics is working to further expand its focus on manufacturing cost control and productivity enhancement through the creation of a dedicated LEAN training program in its Kenosha, WI facility.

The program will be implemented and supervised through the newly created position of LEAN Manufacturing Engineer.  The inaugural incumbent is Shriraj Parikh, who is also new to CPC, being hired in from his former position as Lead Lean Engineer for Bimba Manufacturing, Monee, IL.

“My immediate objective is to install an effective training program across all plant disciplines, with particular emphasis on CPC’s cell manufacturing system,” said Parikh.

Aug. 13th marks the 6th Annual Dudefest, a benefit concert for Misericordia. The primary goal of the night is to support the programs that enrich the lives of the more than five hundred and fifty children and adults who call Misericordia home. All proceeds from the event will go directly to Misericordia. (http://www.misericordia.com/)

Your support for Misericordia by participating as a Corporate Sponsor is greatly appreciated. The deadline for sponsorship is Friday, August 5th.

Bill O’Connor, President of Commercial Plastics, has been on the event committee since 2012, and the O’Connor family has been supporting Misericordia for over 50 years.

Please let us know if you need any additional information. If you would like to be a sponsor, please contact Commercial Plastics at [email protected].  Why Dudefest?  Our dear friend, cousin, sister, aunt, Bree Creevy, nickname The Dude, lives at Misericordia and the main reason behind Dudefest along with all her friends and family at Misericordia.

Questions about the event? Please contact the Dudefest event committee at [email protected] Thank you for your support – and hope to see you at Dudefest!

Commercial Plastics Co. has purchased certain assets of Lenco Inc.- PMC , according to the financial advisor for PMC Group Inc., the parent of Lenco.

Stout Risius Ross of Chicago served as the exclusive financial advisor to PMC Group. Terms of the transaction were not announced.

Commercial Plastics officials did not respond to requests for comment.

Lenco is a molder in Waverly, Neb., specializing in high volume injection molding, assembly and secondary finishing. According to its website, it has a tool room and 60 injection molding machines. It also CD and DVD packaging and a wide range of bar and food service plastic items.

Commercial Plastics is based in Mundelein, Ill. It expanded in November, 2014, with the acquisition of assets from injection molder Xten Industries LLC, in Kenosha, Wis. That operation is now known as Commercial Plastics Kenosha LLC.

The deal combines two companies with a similar focus: molders that specialize in large-tonnage machines to make aesthetic parts from engineering resins, according to Bill O’Connor, a co-owner of CPC and the company’s vice president of sales.

Both companies also specialize in using automation and performing secondary operations, he said.

“The core values are the same between Xten and Commercial Plastics. That trickles down to the employees as well. We thought they’d make a good fit,” O’Connor said in a phone interview.

The Xten Industries plant in Kenosha will continue business as normal, but the operation will be known as Commercial Plastics Kenosha LLC. All current Xten Industries workers will stay on, including co-founders Bill Renick and Matthew Davidson.

Terms of the deal were not disclosed. Xten employees were told about the purchase on Nov. 12, and the company announced it on Nov. 14.

Pat LaCross, who is working on integrating the two companies, said Commercial Plastics owners Matthew and Bill O’Connor see this as a good time to expand their custom injection molding business.

“They saw a great opportunity to come in and right the ship and get things back on track in Kenosha,” LaCross said in a telephone interview.

LaCross said Commercial Plastics and Xten were similar-sized companies, both with about 140 employees. Xten has annual sales of about $25 million. O’Connor said the combined companies will have 2014 sales of between $60 million and $65 million.

The deal does not include an Xten plant in Lockport, Ill., which recently closed. O’Connor said the news of the deal was very well received in Kenosha.

“I think [there was] a big cheer,” O’Connor said. “They saw what happened in Lockport and got nervous.”

He declined to comment on Xten’s financial situation. O’Connor said the owners of Xten had been considering a potential sale for some time, and recent events accelerated their timetable.

The purchase was not a surprise. Xten officials had filed a Worker Adjustment and Retraining Notice (WARN) with Wisconsin officials on Oct. 22 saying that they intended to sell the company’s assets to CPC. But at the time they noted that if a deal fell through, Xten might close.

CPC President Matthew O’Connor said in a news release: “We see growth opportunity with the quality partnerships Xten has built over the years and look forward to further developing those relationships.”

Xten Industries began as Hauser PlasTech Inc. in Chicago in the 1940s. The company changed its name to Xten in 2000, and in 2002 it moved into a custom-built 78,000-square-foot factory in Kenosha. The company has 31 presses ranging from 60-1,140 tons of clamping force, and has customers markets including consumer goods, medical waste and food industries.

O’Connor said Commercial Plastics has made five acquisitions in the past 10 years. All were small asset purchases — “one-tenth the size of this, easily absorbed,” he said.

The company didn’t publicize some of the previous acquisitions, and O’Connor noted: “We kind of like to fly under the radar a little bit the last few years.”

But this deal is different, since Xten has a higher profile, and because CPC is keeping the Kenosha plant open.

O’Connor said Kenosha may even see growth in the future. The Xten facility was designed to expand, with room to double the square footage. O’Connor CPC may choose to expand its molding capacity in Mundelein, and add more warehousing in Kenosha.

“We’re looking to grow in either location. I think this purchase gives us that opportunity potentially in the Kenosha area,” he said.

Xten’s Bill Renick called the purchase “a smart play by CPC” in the news release.

“We have worked together for years on various projects and discovered along the way our compatibilities and synergies,” Renick, “I am excited about the future.”

Xten’s Matthew Davidson added: “We are also proud that Commercial recognized the great team we have here. It is encouraging to know that our employees will continue as part of a growing company and as part of the fantastic community of Kenosha.”

Commercial Plastics has 33 presses in its 105,000-square-foot plant in Mundelein, ranging from 65-2,000 tons of clamping force. Its markets include aerospace, lighting, recreational and outdoor consumer products.